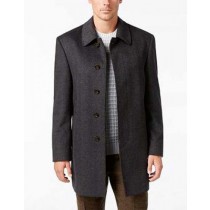 When the winter comes most of us tend to renew our winter wardrobe and this would mean purchasing overcoats especially if you don't have a proper collection. While there are a lot of styles in the men's overcoats most men choose to go with the usual choices like solid black overcoats and navy overcoats. While this is a wise choice considering the versatility of these overcoats but it is better of you step out of the comfort zone every now and then. In this article we discuss the mens houndstooth coats and some of the best ways in which you can style it.

The solid overcoats are a great style which you can style with both formal and casual outfits. But they are usual styles and can be found in almost every man's wardrobe. But when you need a garment that lets you stand out from the crowd and also showcase your personality then you should go with something different. Mens houndstooth coats are a great choice for this since the patterned coat will give you a look that makes you special. For people who are not aware of the houndstooth coats then houndstooth is more like a type of checked pattern.

As for the name of the pattern the main distinguishing characteristic of mens houndstooth coats when compared with the checked coats is that the former has jagged edges that are caused by the tangent twill lines which flare out from the sides. The jagged edges on the squares make it seem like the back teeth of the dogs and hence the name. Mens houndstooth coats are one of the most popular choices when it comes to patterned coats. The houndstooth pattern is also used in formal garments like suits and blazers.

Houndstooth pattern is known to be one of the most popular patterns in menswear history for a long time. The houndstooth pattern first came into use in the 1800s and the place of its origin was Scotland. It was famously known as the Shepherd's check or Dogtooth at that time and was used mostly as an outerwear for the sheepherders. Today the houndstooth pattern has become more universal and even has surpassed the clothing industry. In the start of the 1900s the English came to vacation in the Scottish Highlands and even bought estates there. At that time Scottish clans were in existence and the patterns were borrowed from the sheepherders and was used in creation of the tartan designs. The Houndstooth pattern was more of a neutral designs for the Scotlanders and were not restricted to a certain clan.

By the mid 1930s the houndstooth patterned clothes were seen to be the indication of wealth. This was because of the fact that the then Prince of Wales, Edward the VII wore the pattern almost everyday. The tailoring houses worked with the Royal tailors to produce the houndstooth suits that the Prince greatly favored. The prince's love for the pattern grew and thus he unconsciously popularised the style by sporting it almost everyday. Soon the manufacturing houses started producing houndstooth designs for the general public. Soon the houndstooth pattern became famous not only in the United Kingdom but also internationally. This increased the demand making the British manufacturers get a financial boost.

Nowadays the mens houndstooth coats are available in different fabrics other than wool. While most of the time the overcoats are used for the winter to ward off the cold some use coats for aesthetic purpose even in spring. For these purposes you can go with the light weight ones that will not feel suffocating like the wool coats. Cotton mens houndstooth coats are the most popular choices for these use of coats.

The houndstooth pattern is a classic one and are available in different combinations but it might not be a style that suits everyone. The houndstooth pattern is now being used in almost all garments but when you go with the formal clothing like vest, blazer and such it gives you a busy look. Thus you will have to properly style the outfit when you go with the houndstooth garments. But the safest and easiest to style is the mens houndstooth coats since it is the outerwear and can be paired with both formal and casual styles. But you still have to be cautious while styling the mens houndstooth coats and it is better to invest some time into learning about the styling to get a stylish look.

Considering the historical heritage of the houndstooth pattern it is best to be worn in autumns and winters. When you want to go with the traditional style then you can choose to wear these mens houndstooth coats for the outdoor activities like golfing and fishing that you participate in these seasons. While the houndstooth suits and houndstooth blazers might not be suitable for workplaces you can easily style a dark colored mens houndstooth coat over the formal solid navy suit and save the look. While the houndstooth pattern is considered to be a little informal they result in a semi formal and stylish outerwear which can be a great advantage if you are a person who is already bored with the navy and black overcoats.

We offer in this page

Here is our best sellers :