Peaky blinders is a show that can induce the binge watching desire in you even if you seriously lack the time for it. This is the only compliant that we have about the show but we should add that if you give in and binge watch then the time will be well spent. The storyline is gripping and the actors look like they were born to play the characters. But one thing that kept us hooked on the show was the fashion. There is a lot to discuss but today we will settle with Thomas Shelby trench coat style. The overcoats are one of the details that have seemed to gain a lot of attention and for a good reason. If you are a fan of interesting looks then Thomas Shelby trench coat look is something that you should know about. To be honest, it is your regular style of the trench coats but the outfit with which they wear it and the way they carry the look makes it special. Especially Cillian Murphy as Tommy Shelby was flawless and it is impossible to not fall for his charm. Once we read an article that introduced Cillian Murphy with a phrase that goes“Men want to be like him and women want to be with him”. If this is true, he only intensified it more with his portrayal of Tommy Shelby. You can already see articles popping with the titles like “ how to be like Tommy Shelby?” or “how to get the attitude like Tommy Shelby?”.

The impeccable acting has played a major role in the success but there is also the costume to consider. The series is set to happen in the 1920s and thus the men are seen wearing the three piece suit outfits. If you are a fan of the vintage styles then you would love the Peaky blinders outfit. Peaky Blinders as a gang started out as simple bookmakers but grew to be one of the powerful gang in Birmingham. Tommy Shelby is the head of the gang and he dresses accordingly. His outfits are well tailored and he carries it with confidence. The character’s evolution in the society is well showcased in his costume change too. The style of Tommy Shelby in the first season is not too different from the one in the fifth season but the refinement is the major point to note. As for the trench coat Thomas Shelby outfits,it is almost mandatory in the freezing cold of Birmingham. Also Tommy seems to be just out of the war in France during the first season and this explains the inclination of the men towards the trench coat style. The trench coats were extremely popular during the World war times especially with the soldiers in the trenches. The returned soldiers proudly continued wearing the wartime styles even in the homes. Though Tommy Shelby doesn’t particularly look like he was glad to have the wartime memories, he still seemed to have retained the trench coat.

The costume designer of the series confirmed that the addition of the long coats to the outfits were intentional since there is a kind of elegance that it offers to the outfit and also this is a series with many fight sequences. You just cannot forget the slow motions with the overcoats swishing about. Also what came before we wouldn’t know – the costume with the long Peaky trench coats or the theme song that mentions the tall handsome in a dusty black coat. If you are a fan of the series then you might be thinking of cosplaying the look for the Halloween or costume parties. This might be a popular choice this year all with the end of the series with the last season coming out in a few days. It wouldn’t be too hard for you to get the Peaky Blinders outfits since they are available in almost all stores. Go with the best Thomas Shelby trench coat style and do not forget the flat cap. You could search for the nearby styles using the trench coat shop near me search option but you could also choose to buy trench coats online. When you find different styles that impress you then compare the details like the Thomas Shelby trench coat cost to make the profitable pick. 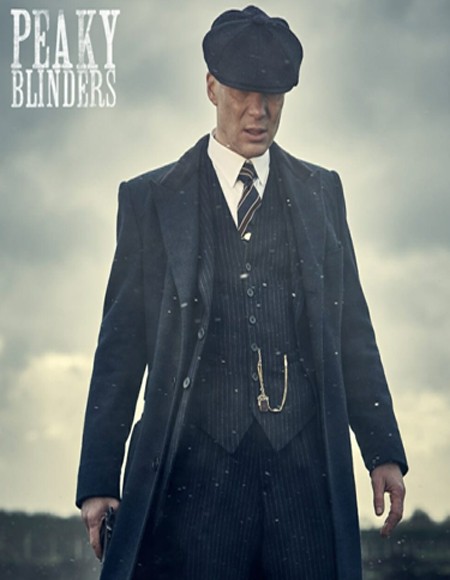 While choosing the trench coats there are few things to note. If you are looking for the exact same style of the Thomas Shelby trench coats then the wool coats are the best choice. But if you are looking for a different style that is more trendy then you can try out the leather trench coat Thomas Shelby look. There is also the option of choosing the denim trench coat style especially for people who want a popular look. You might be obsessed with the Thomas Shelby looks but might need some trench coat outfit ideas to start with. Here is the simple style guide for dressing like tommy Shelby. The suits should be three piece complete with the waistcoat. The unofficial style of Peaky blinders seem to be neutral colors and thus choose suits in black, grey or brown. If you are choosing the Thomas Shelby style, make sure that your outfit is well tailored Especially the waistcoat. As for the overcoat, it also should be neutral colors. Thomas Shelby trench coat black is the most common style to choose but you could also choose to go with the brown Thomas Shelby trench coat style. There is one time in the fifth season when Tommy seems to be wearing a navy trench coat style. You can make the choice depending on your taste. Other than these basics there are the minute details to note. For example, while Tommy always seems to prefer the necktie look while Arthur chooses the bow tie look. Also Tommy has the watch chain with the red pendent on it which is different from the other characters.